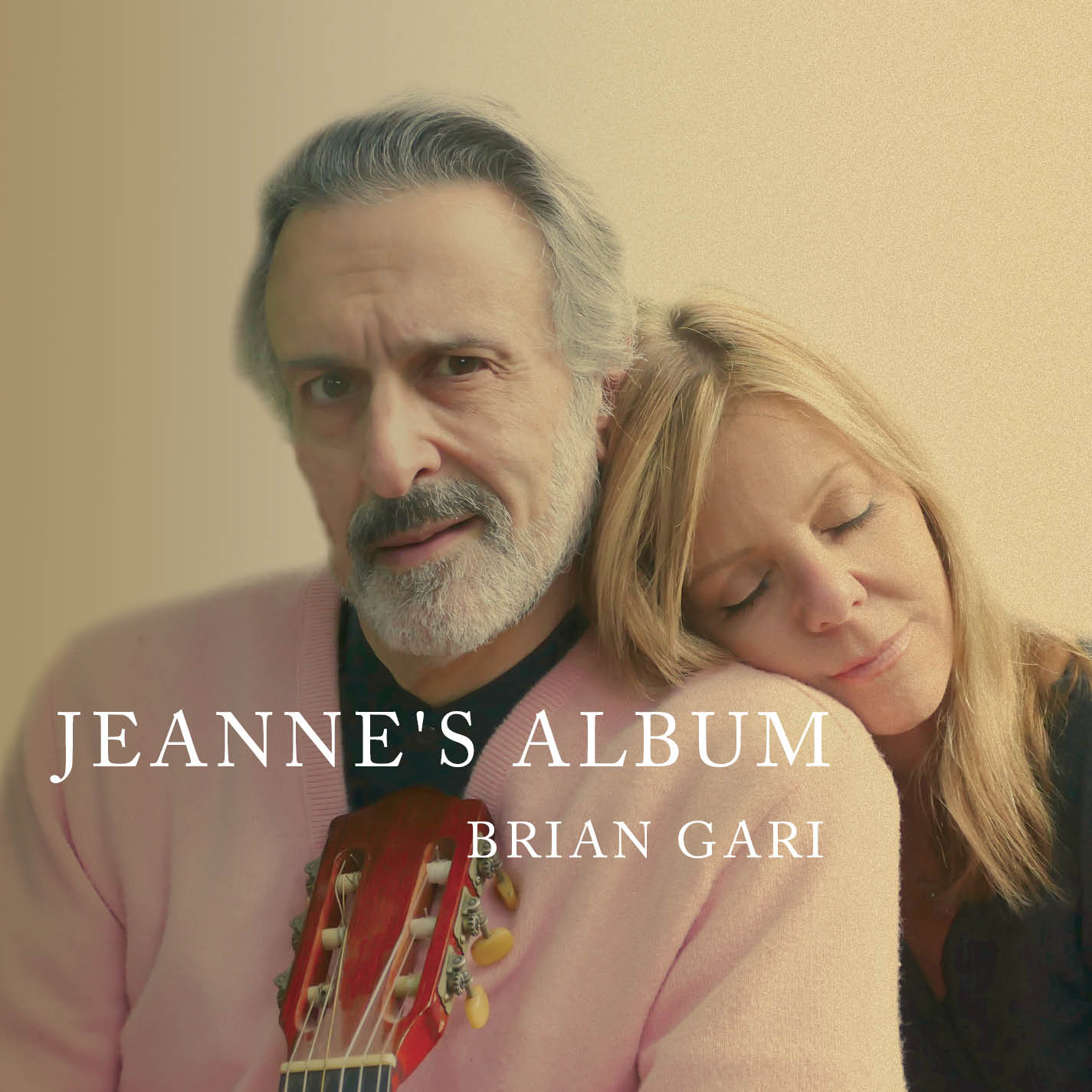 Celebrating Love
Brian Gari's albums are always filled with clever hooks, surprising word play, and warmth. He's written cabaret songs, show songs, and a ream of pop tunes. His newest collection, "Jeanne's Album," is just that: a collection of songs about, for, and to the love of his life. The songs are what you'd expect from Brian and from a man hopelessly in love. There are show songs such as "No Checks," "The One Right Before You," and "Busy Enjoying You." There are giddy love songs like "Jeanne Zoppi," and "I Like Looking At Your Face." "I Got What I Wanted," and "Can It Be This Good," are heartfelt Valentines. There are even a couple of Christmas tunes, one of which "Never Ending Christmas," would make the Top 40, if there were still such a thing. All in all, another listenable project and hopefully the source of a future cabaret set when Mr. Gari returns to the stage...Edgar Bullington

I Love Jeanne's Album!
As expected, I am crazy about Brian Gari's new CD, "Jeanne's Album," with songs inspired by and dedicated to his wife. I'm not sure who is luckier. Jeanne? Or myself for having the pleasure of listening to these songs? (She is--though it's close!) The melodies, a quality so important to me, are fun and memorable. I especially love "Jeanne Zoppi," "Saving Each Other's Lives," and "Whose Hair Is Longer," which is touching and whimsical at the same time. But all are great. I only hope that those who have never heard Brian Gari's songs will give this collection a listen. Oh! And the Christmas songs! Love this CD! By the way, "Jeanne Zoppi," when being sung, sounds like "Jeanne's happy." I'm sure she is . . . and so am I! Scott Bennett Walker

A Terrific CD
Brian Gari is a very versatile and wonderful songwriter, singer and musician. This CD is a loving tribute to his wife. Brian's talents are very unique and when one listens to this CD it could be by no one else except Brian. He has a unique and terrific style that is influenced by many great pop song writers and singers including Gilbert O'Sullivan, Anthony Newley, and many more. I highly recommend this recording. Hats off to a unique and special artist...Richard Glazier

Brian Gari Does It Again!
As the writer of 1000s of wonderful songs, Brian Gari has produced a collection that remind us the things that make life worth living. His songs reflect a range of influence from Frankie Valli to Sergio Mendes in an authentic and enjoyable form. I thoroughly enjoyed this CD, and I am sure that others will as well...Ray Pointer

A Musical Love Letter
Jeanne's Album, by Brian Gari, lifted my spirits. Each buoyant melody supports poignant lyrics in tribute to the love of his life. Whimsical sometimes too, and sung always to us, it also feels like he's happily aware his wife Jeanne is watching and listening and enjoying. Beautifully produced by Brian Gari and Peter I highly recommend...Mimi Turque

Memorable & Hummable Tunes
Brian Gari's latest album, dedicated to his wife Jeanne, is terrific, from first track to the last. The melodies are catchy, the lyrics range from clever to funny to sweet, and the production value is top-notch. There are even two Christmas numbers that should be on every radio station's December playlist. If you're looking for memorable and hummable tunes, Jeanne's Album has got 'em...Fred Raker

Great Album!!!
A terrific new collection of songs by singer/ songwriter Brian Gari, that deserve to be heard worldwide. Wonderful lyrics and great melodies abound throughout the entire album. Hard to pick a favorite!!! Congratulations to Brian and producer Peter Millrose on their terrific collaboration. Special congratulations go to Brian's lovely wife Jeanne, for being the inspiration for this marvelous work of art...Tony Babino

Brian Gari Does It Again...Another Wonderful CD
What a wonderful tribute to his wife, Jeanne. The lyrics are romantic, distinctive and unique and sung with such real feelings and emotion. I highly recommend this beautiful album which you will enjoy listening to over and over, especially with that significant person in your life. Congratulations Brian on a very special CD...Richard Bloom

Dedicated To the Woman He Loves!
Brian Gari's latest Album Jeanne's Album is wonderful! And not a surprise if you know his work! I recommend it highly. Brian's music is always terrific and he a wonderful way with lyrics! You won't be disappointed. 14 tracks and 2 bonus tracks! Lou Dicrescenzo

Wonderful New Music From Brian Gari
Prolific songwriter Brian Gari has delivered a new album of songs written for his wife, Jeanne. The melodies are inventive, lyrics clever and the production by Brian Gari and Peter Millrose is first rate. Congratulations, Mr. Gari, on an excellent CD! Joel

Uplifting Collection of Love Songs
Chet Baker fans will recognize a nod to Mr. Baker's album "Chet" on the great cover shot of this cd. A fun collection of songs inspired by and dedicated to his wife Jeanne, Brian takes the listener on an often whimsical journey through their relationship covering the good times as well as the hard times with equal measure while never losing a positive attitude or sense of humor. If you're looking for a cd that focuses on the glass being half empty, this isn't the cd for you. Brian Gari's glass is filled to the brim with love on this one. Enjoy! Tim Rayfeyer

Back To The Main Page